Chris Anthem (b 1974) is a British artist living in Beirut. He has strong links to Lebanon and East Africa, living and painting in Sudan for the past 3 years. Recent projects have included painting dresses for Basil Soda Haute Couture, and The Budapest Art Factory Residency. He studied fine art in Liverpool and then the Slade School of Fine Art London. He presently works from a studio in Ashrafieh, Beirut.

The Melancholia of Mung

“You’ve been playing with the gods again. You stink of them. All vile semen and spittle” His mum said.

He wiped the paint on his hands across his stomach. He was a smudge of charcoal, oily with sweat. His brushes were stumps of bristles coagulated with undifferentiated paint.

“But I was just dancing and the paint sort of got attached” he replied. “I was making flags to attract the spirits. Painting these banners so that they might see them if the pass over. They will see them and know that I’ve been dancing, that my spirit is pure and I have been congruent with myself.”

“I’ll give you “congruence”!” his mother scolded. “the gods are more likely to wipe their arses with these rags. Is that congruent enough for you.”

He felt an unease after painting. It was one thing to make banners to attract the attention of the gods and another thing to be caught in the eyes of another, the OTHER, making things so unselfconsciously. He came in from the garden. Night was falling and the paintings  settled dampening with mellow dew.

“And wipe your feet on the way in!”. He looked down at his charcoal smudged toes, with their too long taloned nails. the vultures had roosted in the trees above the paintings, Cocking heads eyeball after eyeball scanning the paintings with sticatto twitches.

He climbed into the bath tub. Sat in its inch of water and watched the paint make a ring around the water line.

“In the studio the dress patterns hang, floating from a baton, secured like flags in a country church. They billow where the studio draft lifts them. They breath. The cow hides hang gruff heavy. Each extend the quality of the other – as dress, as surface, as weight.

Paint has an ambiguous nature; on the one hand pertaining to be other than its material actuality, whilst it still offers the possibility of being congruent with an honesty of spirit. I recognise that honesty in paintings when I’ve managed to keep its energy there. In some paintings that honesty dies, it gets lost in its own rhetoric and the painting’s energy dies, or rather the paintings commit their own clichéd suicide, stillborn in the cowl glister of varnish. It still surprises me that honesty and mortality are still so co-dependent and that short-cuts of effect kill paintings.

Every successful painting that I’ve done has had at its core a tangible event, something unresolved and nagging to get itched. That before the idea, the internal image, before the composition and the stitching of sources and technique there is the event. In the painting, in spite of its seductive surfaces and its neurotic baroque, there lies some tender actuality that only a brush and oil would soothe, and only a humility of mark can address. Paint and oil are the salve that cures the surface – balm of a meglip scab.

And I guess it’s that rupture, that intrusion on the surface tension on the canvas; or paper, or mind, or body, that the rest of the painting dresses – like you would, whether functionally or theatrically, a wound.”

To “Fledge” is to care for, to nurture, to feather a nest, but in contrast it is also to make an arrow (the root of fletch). It is along these two poles of the tender and an implied wound that Chris Anthem’s paintings oscillate. Presenting a fragile and visceral vision of the human condition.

Predominantly working on paper used for dress patterns that he associates with his childhood (his mother tailored whilst working at a doctor’s house; an early introduction to medical illustrations that often appear in the work). These delicate surfaces appear fragile in contrast to the often heavy mark making and weight of paint. The reading of these surfaces can be extended through recent paintings on animal hides, where the epiderm is scored, tattooed and stitched. It is across the intimate quality of the surfaces that the paint often seems to function as a balm to heal some ineffable rift. 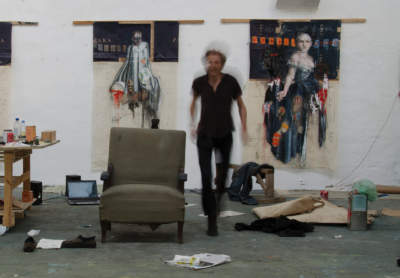 The works on animal skins originated whilst working in a studio in Ethiopia in 2011/12. They developed through being both open to the subtleties and ambiguities of place, and of alienation to that place. These images combine forms and patterns from drawings made in southern Ethiopia amongst the tribes of the Omo valley, and figures sublimated into a western aesthetic from street life in Addis Ababa. The silhouette of a cranium form is rendered in black household gloss paint; flat and resistant these heads evoke ideas of a figure balaclava-ed, veiled, masked or helmeted.

In 2012 Anthem relocated to Beirut in Lebanon; where growing tensions spilling over from the Syrian conflict have reinvigorated sectarian and religious differences within the neo-conservative consumerist society that Lebanon has become after it’s own devastating civil war. In his words it is: ”a place where the wound is buried deep in an amnesiac consumerism and neurotic self consciousness. A place where globalisation is mistaken for cosmopolitanism.”

Here his mixture of high art baroque figuration, blended with allusions to tribal difference, and the use of materials associated with both consumerism, tribalism and his own intimate childhood have found a new resonance. It is in this context that the innate humanity and tender violence of his work responds to the contemporary and historical energies of time and place.